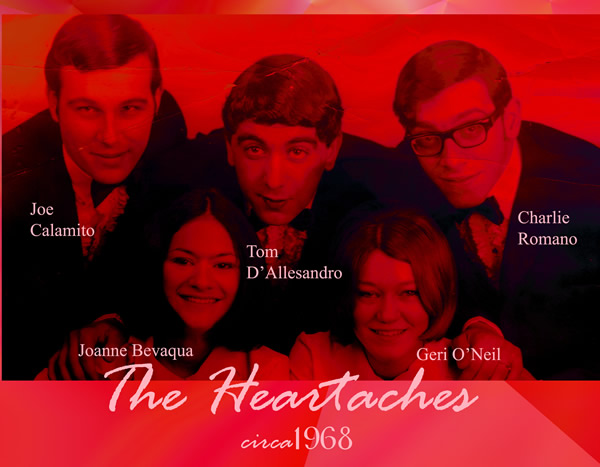 The Heartaches began back at Holy Rosary grammar school in Downtown Jersey City, New Jersey sometime around 1961. Back then they were called the Vydells. Joe Calamito started the original group after watching American Bandstand. He decided he wanted to sing bass in a doo-wop group. Having no idea how to begin, Joe Calamito talked a few friends in trying to sing at a grammar school class night program. He recruited the help of one of the star football players on the Holy Rosary football team, Tommy D'Alesandro. Joe Calamito and Tommy D'Alesandro's friendship has spanned more than 40 years and lead them on a vocal journey that lasted 30 years where they performed with some of the best vocal artists on the American doo-wop and top 40 scene.

After a disastrous performance at the grammar school class night. Joe Calamito and Tommy D'Allesandro realized that what they needed was better singers and more rehearsal-lots more. After trying -retrying and trying different singers, they found the perfect vocal blend in what became known as Joanne and the Heartaches, and then finally just the Heartaches. The original Heartaches Joe Calamito bass- baritone, Tommy D'Allesandro, 2nd tenor, Charlie Romano tenor, Bobby Taglarini tenor and, lead singer Joanne Lucas spent two years listening to the radio and practicing songs they heard and liked and then attempted to put them into acappella renditions.

The Original Heartaches worked hard to achieve their own style and blend of harmony and at that time became known as "Blue Eyed Soul group." In 1964 they entered a state talent contest and were awarded third place. This lead to various performances in and around New Jersey. In 1965 they signed a recording contract with Stan Krause's Catamount record label. In the summer of 1966 "I' m So Young" b/w A Lover's Call an original song by Calamito was released. They appeared at many more shows especially the legendary State theater in Hackensack NJ along with The Royal Counts, The Concepts and the Persuasions and many of the early acapella doowop groups, the Zircons, the Delstars etc. The Heartaches became known for their female lead-four man back up harmony. In 1967 the lead vocal shifted from Joanne Lucas to Gerry O'Neil.

In 1968 Joanne Bevaqua and Russell Capo were added. They were now called the "Heartaches" They performed in and around the metropolitan area until 1969 when the group stopped performing after Calamito entered the United Sates Army. In 1971 an attempt to regroup took place but only for a few months. However Joe Calamito and Tommy D'Alesandro continued to sing with Russ Capo and became known as the "Neighborhood Wish" Performing at Ronnie I's UGHA. There they performed with an acoustic guitar played by Calamito and singing originals by Crosby Still and Nash and others from the 1970;s. Fortunately this was short lived and the group broke up. 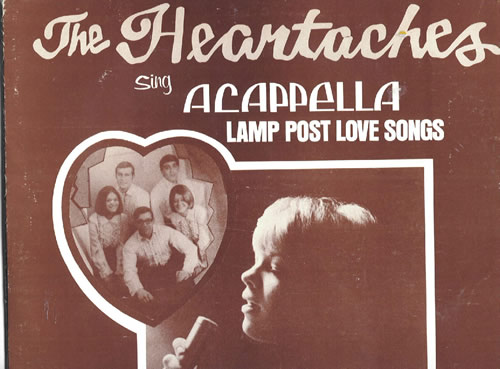 The story would end here, but Calamito and D'Alesandro were persistent to continue on and in 1981 along with Raul Vicente and Phil Granito (he now sings with the Dupree's) united for what would be the most popular Heartaches to date. This four-man vocal powerhouse performed with many of the rock and roll greats (see picture with Righteous Brothers) Imus, Jay Black. They won a contest sponsored by Richard Nader in 1983 and performed at Madison Square Garden. Appeared on the Americana Circuit and countless shows at Club Bene and Hoboken's Mile Square City nightclub. Appearing with most of the legends of early doo-wop. They sang back up on two children's Album's, sang back up on a disco hit in the UK for a performer named Choppers. Sang the voice over on a Sassoon Jeans Commercial. Appeared on the Joe Franklin show, The Don K Reed radio show and eventually signed a production contract with Lou and Dave productions which would lead to a one year contract with RCA records in1985. Unfortunately in 1985 Phil Granito left the act to peruse other interests. As a result the sound was not the same. The remaining members Joe Calamito, Tommy D'Alesandro and Raul Vicente added a four-man band behind them and performed for 5 more years as the musical version of the Heartaches. In 1990 the group disbanded.

All the original members of the Heartaches have remained friends over the years, a bond that was established in the echo of a hallway, the bright lights of a school auditorium stage. The Heartaches like many of their counterparts who came to sing, never achieved the "hit" record. Nonetheless, they do hold a place as one of the early pioneers of Acappella and their efforts, along with all the groups who performed in the early years achieve credibility and some success, because you the reader has stopped to acknowledge us by clicking on this page. 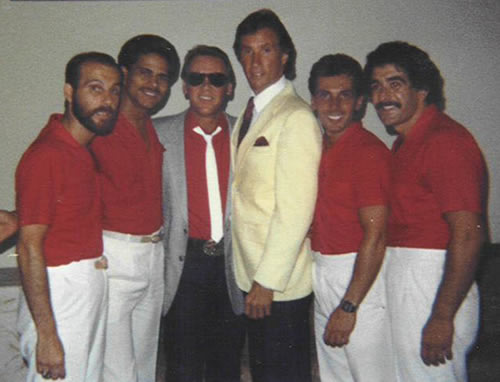