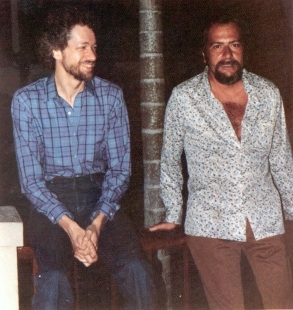 THE BEST OF RELIC RECORDS

Relic Records was one of the first labels exclusively devoted to R&B reissues. Inspired by Irv "Slim" Rose's fabled Times Square Records, Relic was started in 1963 as a strictly 45 label specializing in R&B vocal group harmony. (It wasn't ever called "doo-wop" until the early 1970s ... ) Relic's first album, "Best of Acappella, Volume One" (Relic LP 101, now reissued as Relic CD 7052), was released in February, 1965, and our 5000 LP series was launched with "The Harptones" in 1971. The selections on this CD compilation were all issued on Relic 45s in the sixties and early seventies. They are mostly a direct reflection of Relic founder Eddie Gries's personal taste; many of these records had been forgotten by everyone concerned when Gries and I bought or leased the masters for the growing young collector market. 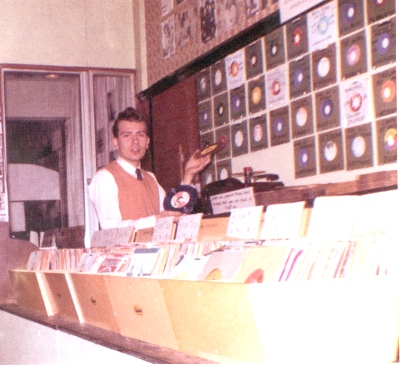 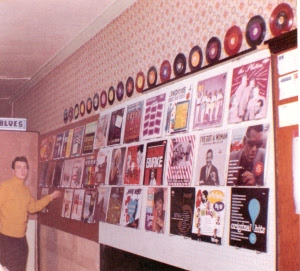 The early history of Slim Rose's Times Square Records and its profound influence on young entrepreneurs and R&B fans has been thoroughly documented elsewhere. (See, for example, liner notes for "Golden Era of Doc Wops: Times Square Records" (Relic CD 7091), the Edsels' "Rama Lama Ding Dong" (RCD 7050), and the notes to Rhino Records '"Doo Wop Box.") When Slim was persuaded by Jerry Greene (according to his account) to advertise his struggling shop on Alan Fredericks's "Night Train" radio show in the fall of 1959, he created an instant market for old vocal group 45s. Collectors all over New York City vied to locate obscure and little known doo wop 45s, many issued by forgotten, short-lived tiny labels. Most of us were still teenagers and we responded most favorably to strong up-tempo tunes preferably featuring high, wailing tenors and rumbling basses. We loved the Frankie Lymon inspired "kiddie" sound and we appreciated the heartfelt doo-wop ballads of the mid-to-late fifties much more than the polished rhythm and blues warblings of the Dominoes, Ravens, Five Keys, or Orioles. As a result, Relic's early 45s were a decidedly mixed bag of just about every kind of group harmony, although all were pitched directly at the young collector market. 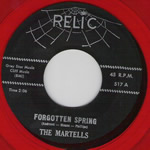 Gries intended to find and reissue masters from the fifties and early sixties which would appeal to collectors and might even emerge as regional "sleepers" with appropriate radio play. Slim had been directly responsible for creating several important national hits which he had only promoted as "oldies." The Capris' "There's a Moon Out Tonight," the Shells' "Baby Oh Baby," and the Edsels' "Rama Lama Ding Dong," among others, would not have been resurrected from oblivion had it not been for Times Square Records. With his popular 45s by the Timetones inching up the national charts, Slim's own Times Square record label was making its presence known in the early sixties.

The first Relic single was the Four Most's I Love You' / 'The Breeze and I" (Relic 501), originally released in the winter of 1960 on Joe Flis's Milo label, an adjunct to his tiny recording studio and publishing company in Harrison, New Jersey. "I Love You" was pressed for Relic by Kay Records in Little Ferry, New Jersey in different shades of colored vinyl and, almost miraculously, started to sell throughout the New York area as a result of concentrated airplay on Danny "Katman" Stiles's WNJR show, partially sponsored by the new Relic Rack shop. "I Love You" was purchased outright from Milo for $150, a handsome sum in those days for a master which had probably not sold one copy upon its initial release.

The next group of Relic 45s were direct reissues of 45s originally produced by Jerry Winston's Onyx label between 1956 and 1958. Winston sold his Onyx masters to Relic for $2500 in June, 1963 and Relic proceeded to press the best Onyx 45s on both colored and black vinyl under the distinctive new "Relic" logo. The Velours" 'Can I Come Over Tonight?" was Onyx's biggest hit and it soon became the cornerstone of Relic's growing catalog.

The Teenos' quirky "Love Only One" was a personal favorite of Eddie Gries when Slim featured the song on his radio shows in the early sixties. Originally issued by Foster Johnson's short-lived Dub label out of Little Rock, Arkansas in 1958, "Love Only One" was a thorough bomb. When my high school friend and first record partner, Wayne Stierle, and I bought hundreds of copies of the Edsels 'Dub 45, "Rama Lama Ding Dong," to sell to Slim, we were offered stacks of the Teenos' single for about a dime apiece. Slim bought some on condition that he pay thirty five cents each, a considerable reduction from his usual wholesale price of half a buck per record. A couple years later, I contacted Johnson and sold the rights to Relic in September, 1962 for $150. Although the Teenos had completely vanished, we were quite meticulous when securing the legal rights to reissue these forgotten masters. This and other similar deals helped me pay for my last year of college until I joined Relic permanently in June, 1964.

Ed and I bought three very desirable masters (or so we thought ... ) from New Haven, Connecticut attorney, Joel Alderman in August, 1963. Originally released on Alderman's makeshift Ancho (first called Anchor) label in 1957-58, the six sides by the Academics and Starlarks were only fair sellers when reissued by Relic. (Some years later we finally appreciated the unfortunate fact that most collectors preferred to purchase 45s on exact reproductions of the original label, rather than on a reissue logo.) The Academics were a talented young white group from Hillhouse High in New Haven, whose chief distinction may have been lead singer Dave Fisher's departure to form the Highwaymen ("Michael, Row the Boat Ashore") a few years later. Wes Forbes and the Starlarks were remembered for their moving doo-wop ballad, "Fountain of Love," originally released on Alderman's Elm label in 1956.

Although Ed Gries and I usually personally preferred the black group sound, Ed took a special liking to the Illusions' Mali disc, "Hey Boy," first released in March, 1962 and reissued by Relic only a year later in the fall of 1963. Jerry Blavat made "Hey Boy" a Philly favorite in the mid-sixties, but Mali had two partners. One sold "Hey Boy" to Relic, and his equal peddled the master to Jerry Greene and Jared Weinstein at Lost Nite Records in Philadelphia.

"Our Love is a Vow" was a reissue of an obscure 45 on Karen Records by the "Levee Songsters." For obvious reasons, Gries shortened the name to "Levees," although the Levees' song first came out as by the Teentones on the Rego label in 1958. The Brooklyn based group was better known as the Mello Harps and the original group - Daniel Elder, Bobby Hawkins, Ron Fox, Arnold Malone, and Vernon Staley - cut their first version of "Love is a Vow" for Morty Craft's Do Re Mi label in 1955.

Eulis Mason and the Martels were an excellent obscure group who cut "Forgotten Spring'?'Va Va Voom" for Gradie O'Neal and John Pusateri's Cessna and Bella labels (it's still unclear which label was first) in 1961. One of Eddie's personal favorites, the wistful ballad out of San Jose, California was quickly forgotten even on Relic reissue.

For the sum of fifty dollars, Relic bought all rights to the Unique Teens' "Whatcha Know New"/"Run Fast" from Ulysses Smith's Dynamic label in 1963, and Gries eventually discovered that most collectors preferred to purchase "Whatcha Known New" on a Dynamic second pressing rather than on the Relic logo.

The companion Relic "gold" 1000 series was launched in 1964 to complement the original "500" series. We purchased the Zircons' regional noisemaker, "Your Way' / 'Lonely Way," from Mellomood Records (owned by fellow collectors) and promptly reissued the single as Relic 1008. The Excels' "Baby Doll" appeared on Central Records in the summer of 1958 and was inherited as part of Relic's purchase of Times Square Records in March, 1965.

The rather mediocre songs by the Quinns, Newtones, and Kents on this CD were originally produced by Al Browne, whose prolific combo backed the Heartbeats on Hull, the Deltairs on Ivy, and the Crests on Joyce. When we purchased these masters from Browne in 1965, we received unmarked tape boxes lacking dates or session data, but, presumably, the material dates from the late fifties. The Kents became the Criterions on Cecilia (Tim Hauser of Manhattan Transfer's first group), while the Newtones recorded a very rare single for Baton, I Remember the Night' / 'Going Steady," in 1958.

When Relic purchased all rights to Leo Rogers's Bruce label, we reissued the best Harptones' singles on 45. "My Memories of You," of course was their hit follow-up to "A Sunday Kind of Love." (All the Harptones' great Bruce recordings can be found on Relic CD 7021.) Willie Winfield and Raoul Cita's fine group has become a particular favorite for discerning R&B collectors over the years.

Slim purchased several sides by the "Moonglows" from Lana Records. Although this phantom incarnation of the Moonglows probably contained few original members, if any, they re-recorded the Moonglows' hits for the Sutton brothers' cut-rate, mass market Lana label. I Pray for Love" was included on Slim's Lana tape, but it was first issued by Relic on 45 in the seventies.

Though original multi-colored and colored vinyl Relic 45s have become collectors' items on their own, most were anthologized on two Relic LPs in the seventies and, since most master tapes have been well preserved, they sound better than ever on our "Best of Relic, Volume One" CD compilation. 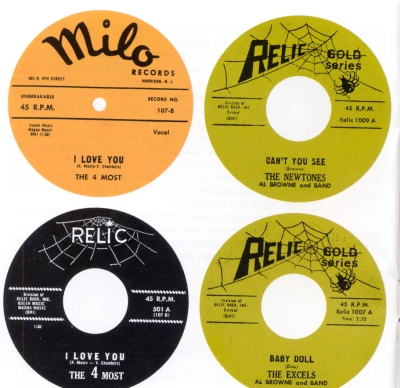 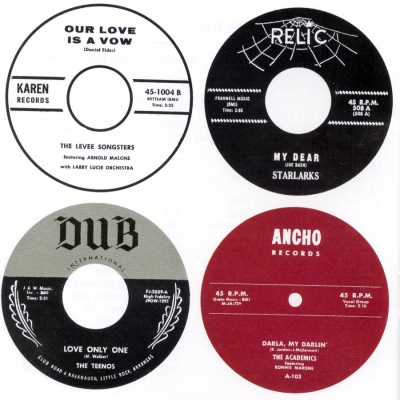 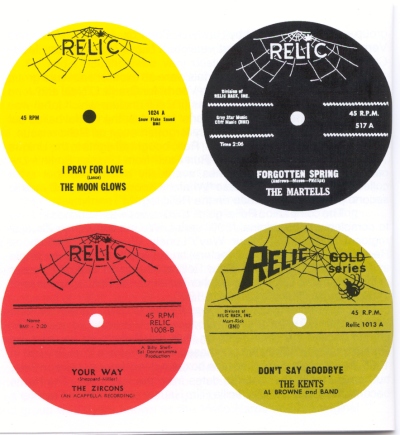 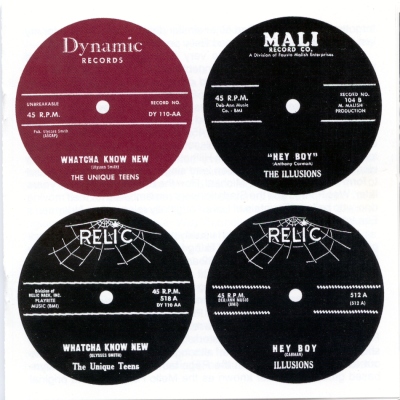 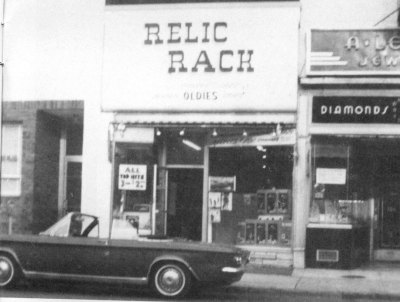