1964 Medieval 201 "I'm in Love" / "Let Me Come Back"
1964 Medieval 207 "Since You've Been Gone" / "Baby I Wanna Know"
By the later part of 1963, as the Diablos were dissolving, the Velvet Angels were forming. The group would include Diablos alumni Jay Johnson and Willie Hunter along with Bobby Calhoun (baritone) and Cy Iverson (tenor). Iverson had gone to high school with Johnson, and Bobby Calhoun had recorded with Johnson as part of Williams' "new" group on Fortune. They were inspired by groups like the Mills Brothers and Ink Spots.[9]
The Velvet Angels performed at clubs around Detroit and across the border in Canada and soon traveled to New Jersey in search a deal and shows. Soon after setting up residence in Jersey City, New Jersey they found an advertisement for a talent show in the local paper. They performed at the show and won. Frank Sheldon, the show sponsor and owner of the Tender Trap club in Fairview, New Jersey, was looking for this type of group.[10] The Velvet Angels were talented and versatile doing a mix of R&B, pop, gospel, and soul music, and doing them all a cappella. Things were starting to happen for the Velvet Angels; they were hired to do commercials for Lionel Trains, but their manager became ill and that deal fell apart.[3]
Nolan briefly joins the Velvet Angels
Nolan Strong had remained on good terms with Hunter and Johnson and had talked about reuniting with them. Sometime during 1963, Strong came to New Jersey and spent some time with the group, rehearsing and appearing with them at the Tender Trap. Some of the rehearsal sessions at their hotel (the Madison Hotel in Jersey City, New Jersey) were recorded on a basic home tape recorder. Angelo Pompeo made the acquaintance of some of the group members and eventually purchased some of the rehearsal tapes. Johnson was not there at the time of the "deal", nor aware of it until after the fact. The tapes soon found their way to Eddie Gries, who issued some of the tunes as singles on his Medieval label.[9]
In 1964 "I'm in Love" b/w "Let Me Come Back" was issued as Medieval 201. Both sides highlighted the bass work of Johnson, with a bass lead on "Let Me Come Back", and the driving bass on "I'm in Love" (also released as Co-Op 201). Medieval credits "Strong" as the writer while the Co-Op version credits "Calhoun-Hunter-Johnson-Iverson". Strong is heard on these tapes but mostly as a background singer, although he did lead vocal on "Fools Rush In". More Velvet Angels material was released later through Gries on the Relic Best of Acapella series, as well as his Acappella Showcase Presents the Velvet Angels LP, also on Relic. The picture of the Velvet Angels that appeared on the Relic Velvet Angels album incorrectly identifies Johnson (third from left) as Strong.[3] 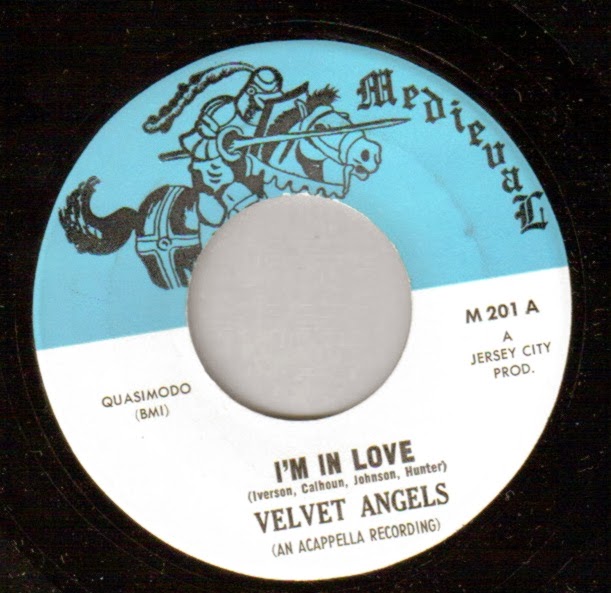 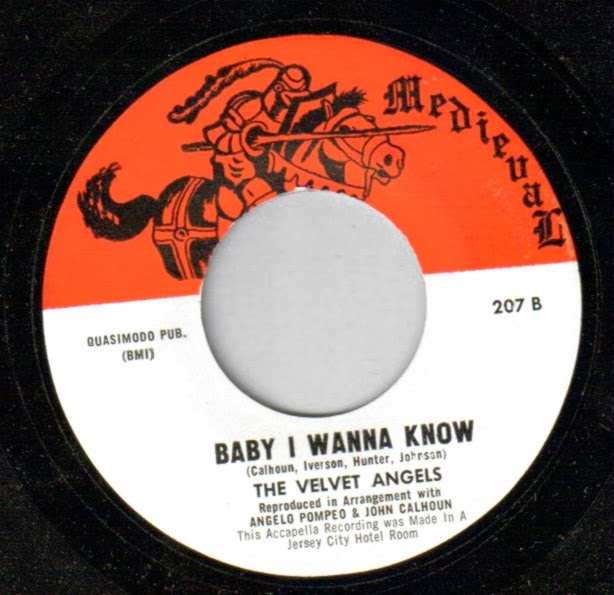