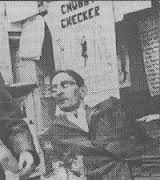 Slim Rose
Times Square Records was the first label truly devoted to doo-wop. With fifty odd singles released between 1961 and 1964, Times Square spearheaded the R&B group harmony revival of the early sixties and directly inspired the Relic, Lost Nite, and Candlelite labels also specializing in doo-wop reissues. The first two releases on Times Square were "(Here) In My Heart" by the Timetones and the Summits' "Go Back Where You Came From," two original songs issued in 1961 which were far superior to many records actually produced in the fifties. 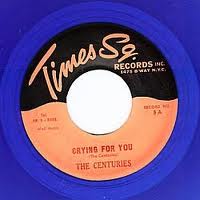 One pleasant Sunday noon in late September, 1959 a casual visitor to Times Square would have wondered why hundreds of black leather jacketed teenage boys impatiently lingered on the stairs which led to a small record shop and to the subway below. A tall, extremely thin, bespectacled middle-aged man with a perpetually tired look ambled over from Grant's Lunch counter across the street to his tiny shop. Irv "Slim" Rose was about to become a believer in the power of AM radio. Encouraged by Slim's part-time clerk, sixteen-year old Jerry Greene, popular deejay Alan Fredericks had played several out-of-the-ordinary R&B group harmony records from the mid-fities on his WHOM Saturday night "Night Train" show. He had mentioned a few times that the Times Square Record Shop was almost exclusively devoted to oldies by vocal groups. The Doo-wop (although nobody used that phrase in those days) Era had begun.

As word quickly spread and more and more eager listeners hungry for group harmony sounds tuned into Fredericks and became regular customers at the Times Square Shop, Rose was faced with dwindling supplies and mounting demand for hard-to-find and out-of-print 45s (albums were just not "collectible" in the early sixties). Aided by Jerry Greene, who, (according to his account) persuaded Slim to stop selling costume jewelry and concentrate on records instead, Rose managed to have various group harmony 45s repressed in small quantities, often for his store's exclusive use, at least for a short period. 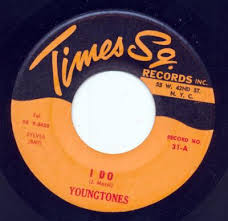 Since the doo-wop sound was still current in New York City in the early sixties, it was possible for some 45s specifically reissued at Slim's behest to receive much wider airplay as new singles since they were not national hits (or, in many cases, even known) on first release. For example, four of Slim's young employees bought the master of the Capris'"There's a Moon Out Tonight" for $200 from the defunct Planet label. The Shells' "Baby Oh Baby," the Chanters' "No, No, No," and, notably, the Edsels' doo‑wop classic, "Rama Lama Ding Dong, all began their long ascent of the national charts from that lowly subway arcade.

Billboard ran a prominent feature story about the Times Square concept; record producers and execs from local labels followed the kids down the stairs to Slim's shop. There was a distinctive "Slim" sound; usually a passionate, high-pitched lead voice (Slim loved the Frankie Lymon knockoffs), plenty of falsetto and high tenor parts, and, of course, the ubiquitous rumbling bass. The classic R&B sound of the pioneer groups of the early fifties - the Orioles, Five Keys, or Ravens - was perhaps too complex (and maybe too black) for the mostly white teens who crowded Slim's store. A few discerning collectors (Mr. D'Elia, for one) recognized the merits of the Swallows and Dominoes in the early sixties, but most customers opted for the kiddie lead -- The Elchords"' Peppermint Stick," the gimmicky doo-wop,  the Five Discs'"I Remember," orthe ringing ballad -  the Admirations' "The Bells of Rosa Rita," all prime examples of the "Slim sound."

The Times Square label was born in the winter of 1961. Slim had acquired the rights to several masters and wanted to manufacture repressings on the original labels. Clarence "Jack Rags" Johnson, the co‑writer of "Desirie" by the Charts and ownerof the tiny Cee-Jay label, approached Slim with an exceptional new mixed group (three blacks, two whites) which, of course, they christened (by way of a contest) the Timetones. Slim was initially opposed to the creation of his own label; he was very busy just running his shop. Wayne Stierle, who helped in the store and supplied Times with key reissues, persuaded Slim that his image would be greatly enhancedby a custom record label. According to Stierle, he then fabricated the first simple black and-silver design for the Times Square label, used only for "(Here) In My Heart" and "Go Back Where You Came From." Slim soon dropped Stierle's design for a more elaborate black-and-orange logo, obviously copied from the legendary Chance Records of Chicago label art.

The Five Sharks were a young white group from Long Island who were known as the "Florals" when they recorded their version of "Stormy Weather." To capitalize on his self-created "Stormy Weather" promotion (he kept offering more cash each week for an original 45 of the Five Sharps' 952 Jubiliee recording, "Stormy Weather;" he never had to pay up and, to this date, no 45 has ever turned up), Slim renamed the Florals the "Five Sharks" and pressed up his first 100 copies on a unique multicolor vinyl Times Square pressing with a longer intro creating an instant collector's item. 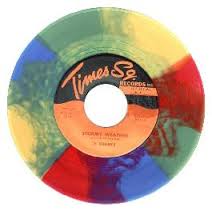 On May 1, 1963, Times Square Records moved one long block east to another seedy subway arcade location, Sixth Avenue and 42nd Street. The new store had much additional space, but still retail sales lagged. Slim continued to release weaker singles on Times Square, championing the group harmony cause a few months before the advent of the British Invasion. The Decoys' "It's Going To Be All Right" (TS#8) was the best of his new singles. Produced by Al Browne, it was a custom "oldie" with a fresh, exciting sound. Perhaps Connie Questell and her male backup group from the Melrose section of the Bronx were a few years too late; they were a vibrant new group who, unfortunately, were tagged as an "oldies" act. They appeared at the Village Gate, the Baby Grand in Brooklyn, and Palisades Park in New Jersey.

Relic Records (then Relic Rack, Inc.) bought the Times Square Record Shop and all masters on March 15,1965. Relic reissued most Times Square singles in the late 1970s and unissued sides on LPs in the eighties. Eddie Gries and I would not be in this business today were it not for Times Square Records. The preservation of R&B vocal groups harmony owes a huge debt to Irving "Slim" Rose's Times Square Records.
Donn Fileti
October, 1994